CWA Local 1180 began its existence as the Municipal Management Society (MMS) in 1954, and was the first “union” of New York City supervisory and administrative employees. In the early 1960s, when public sector organizing exploded and other City workers were making significant gains through collective bargaining, MMS members decided that they too needed to be able to negotiate collectively in order to advance their interests. They signed up the necessary majority of workers, and in 1965 they voted to join the Communications Workers of America. Just two years later, in 1967, with CWA's assistance in overcoming a few obstacles, Local 1180 became CWA’s first public sector local.

Today, Local 1180 remains one of the largest public sector locals of CWA, representing more than 9,000 active members and 6,200 retirees. Union membership is overwhelmingly comprised of women, women of color, and other minorities. Most work in one of the dozens of New York City Mayoral agencies, while others work at H+H, Board of Education, Housing Authority, Transit Authority, School Construction Authority, and the state's Unified Court System. As administrative and supervisory workers, our members process payrolls, manage computer systems, monitor contracts, pay vendors, supervise front line staff, and in general, coordinate a whole host of other City functions that go unnoticed. We are the hidden human infrastructure that makes the New York City work.

Local 1180 also represents workers in the private and not-for profit sectors. Working closely with the Union, members at several locations represented by Local 1180 now have contracts for the first time. They have a voice on the job that enables them to collectively bargain wages, benefits, and working conditions.

From the newest to the most experienced worker, we learn from each other and work together to make our union stronger. Local 1180 is the backbone that supports our members in advancing their careers. When we stand as one, we have the strength to fight for what’s important — fair and decent wages, good benefits, safe working conditions, and stronger communities. 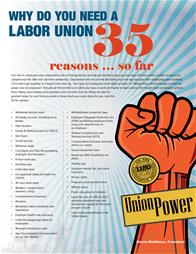